Blade of the Immortal
"To end his eternal suffering, he must slay one thousand enemies!" Manji, a ronin warrior of feudal Japan, has been cursed with immortality. To rid himself of this curse and end his life of misery, he must slay one thousand evil men! His quest begins when a young girl seeks his help in taking revenge on her parents' killers... and his quest won't end until the blood of a thousand has spilled!

Fudou Jun is a highschool teacher and takes a trip with a group of students. While there, a group of martial artists staying nearby take a strange interest in the girls. These men are actually demons and after changing into their true form break into the cabin to rape the girls. One gets Jun and violates her. She feels her soul being torn apart and transforms into Devilman Lady. With newfound powers and strength she kills all the demons and protects the girls from any further harm. What are these demons and why did she turn into a hybrid of one? What does this mean for her and for the rest of humanity?

Happy!
Miyuki Umino was a senior in high-school. Although Miyuki, her two younger brothers and her younger sister were poor, they were happy living together. But, one day all of a sudden her older brother's debt of 250 million yen fell upon them. To pay back the debt Miyuki quit school. What was the incredible choice she took to do this? 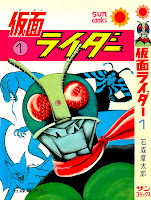 Kamen Rider
The story took place in a world plagued by Shocker, a mysterious terrorist organization. To assist its plan in world domination, Shocker recruited its agents through kidnapping, turning them into mutant cyborgs and, ultimately, brainwashing them. However, one of the victims was rescued just before the final step, and his name was Takeshi Hongo. With his sanity and moral conscience remaining intact, Hongo assumed the identity of the grasshopper-looking altered human superhero Kamen Rider and battled Shocker with his newly acquired powers.

Kekkou Kamen
Welcome to the Sparta Acadamy, run by a head master called Satan's Toenail. If you get anything below a 90 on every test, they punish you with torturous devices and the like. But fear not, there is one who stands up to this great injustice, in nothing but a mask and high boots. That's right, a naked fighter of Justice, Kekkou Kamen is here to punish the unfair system of the Sparta Acadamy and bring justice to those who study too much! 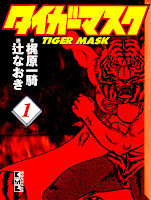 Tiger Mask
Follows the exploits of legendary wrestler Tiger Mask, as he dominates the ring and battles against adversaries from his training grounds, The Tiger's Cave.

Vampire
"Long, long ago, humans lived almost the same as beasts... If you got hungry, you could just find something to kill and eat it.  If someone attacked you, kill them too. Everything was kill to survive, kill to survive. Then people started acting smart and making laws. The laws kept them from doing pretty much everything they wanted to do. Beasts, on the other hand, still have no laws, or etiquette. I predict the day will come when an almost mutant breed of humans will appear, sinking to the level of beasts for freedom... Here, I will call them 'Vampires...'"

Vinland Saga
Thorfinn is son to one of the Viking's greatest warriors, but when his father is killed in battle by the mercenary leader Askeladd, he swears his intent to have revenge. Thorfinn joins Askeladd's group in order to challenge him to a duel, and ends up caught in the middle of a war for the crown of England.
Posted by Nethandle at 5:15 PM